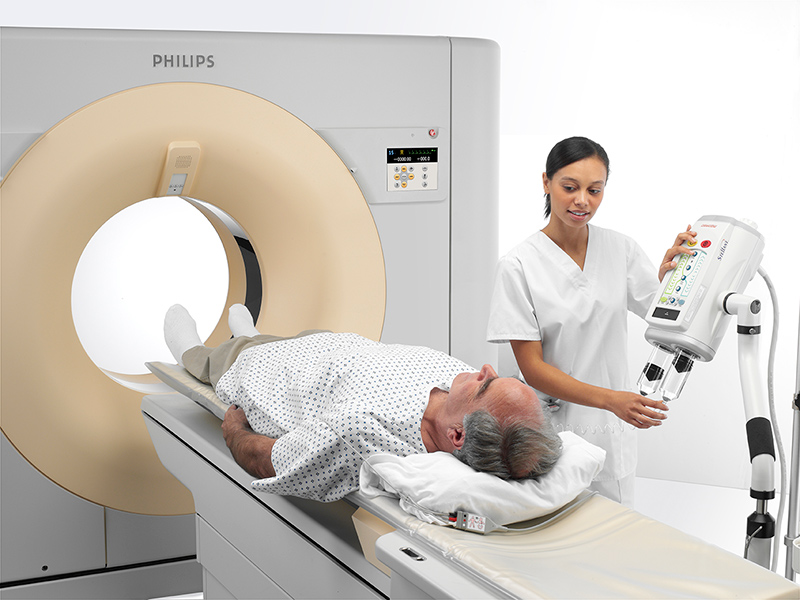 A CT scan, also known as computed tomography scan, and formerly known as a computerized axial tomography scan or CAT scan, makes use of computer-processed combinations of many X-ray measurements taken from different angles to produce cross-sectional (tomographic) images (virtual “slices”) of specific areas of a scanned object, allowing the user to see inside the object without cutting.

Digital geometry processing is used to further generate a three-dimensional volume of the inside of the object from a large series of two-dimensional radiographic images taken around a single axis of rotation. Medical imaging is the most common application of X-ray CT. Its cross-sectional images are used for diagnostic and therapeutic purposes in various medical disciplines.

CT produces data that can be manipulated in order to demonstrate various bodily structures based on their ability to absorb the X-ray beam. Although, historically, the images generated were in the axial or transverse plane, perpendicular to the long axis of the body, modern scanners allow this volume of data to be reformatted in various planes or even as volumetric (3D) representations of structures.

Virtual colonoscopy (VC, also called CT colonography or CT pneumocolon) is a medical imaging procedure which uses x-rays and computers to produce two- and three-dimensional images of the colon (large intestine) from the lowest part, the rectum, all the way to the lower end of the small intestine and display them on a screen. The procedure is used to diagnose colon and bowel disease, including polyps, diverticulosis and cancer. VC is performed via computed tomography (CT). It may be performed following a conventional or optic colonoscopy (OC). Both OC and VC require bowel preparation with laxatives. The bowel requires insufflation with air using a tube placed in the rectum before the procedure. A muscle relaxant is given and there may be some discomfort to inflate the nose enough to allow optimal viewing. A virtual colonoscopy can provide 3D reconstructed endoluminal views of the bowel.

If you need to book in for CT scans, MRIs or ultrasounds, QLD Radiology Specialists are your go-to medical imaging providers. Working with patients from across Carindale, Logan, Springwood, Greenslopes, Sunnybank, and beyond, we offer bulk billing for eligible patients. We accept all referrals, so you can make an appointment by calling 1300 201 888 or fill out an enquiry form.